The Order of the Pure Moon Reflected in Water was quite a surprise. I initially took interest in this Zen Cho novella because of how unique its cover is going around Twitter. I got it last, last week and when I was having a hard time sleeping one night, I decided to pick it up for a quick read. I thought it would be an action-packed story but was treated with a character-driven plot with found family dynamics, a lot of amusing banters and a side story on finding one’s identity. What started as a wuxia-ish story morphed into a study on identity and a lesson on moving forward and making a new life despite past tragedies.

“You’re moonlight on the water, brother. I should have known what you were from the start.“

The story started at when Guet Imm, jobless after a recent encounter in a kopitiam she worked in before, joins Tet Sang and an eclectic group of thieves as they travel to sell contraband to neighboring towns. It’s such a simple plot really but the way the narrative unfolds to reveal a unique world is such a thing to behold. An ongoing war that no ones talks about. Religious orders falling prey to extinction. Questions on identity and purpose.

Guet Imm was a nun and a follower of the Pure Moon. Reading the five key devotional practices of the followers of the Pure Moon really piqued my interests – and made me wish it was explored more. I also particularly enjoyed and appreciate the treatment of gender-fluidity and queerness in the Order (“As the Pure Moon, she only accepted women as her votaries, but her doctrine allowed her followers to decide for themselves whether they were women enough to count.“) as well as, generally, in the world this story was set it. Malaysian words and distinct expressions, as I’ve read in other reviews, are generously peppered throughout the story – I kept using google search just to get a clearer image in my head, which was definitely fun. I could only imagine how thrilling it would be being a Malaysian kid reading this story and recognizing all these elements in it. I also found the “silent war” (“Yes,” said Tet Sang. “Open death, open atrocity, open persecution. But a silent war. It’s safer to be silent in these times.”) quite intriguing and honestly thought a more-full bodied story and full-blown novel could come out of it if explored.

Pure Moon honestly felt like a beginning of something far more epic. And at the end of it, I feel almost disappointed that it was this short because I wanted to read more of it. It gave such short glimpse of a rich and intriguing world. I wouldn’t be surprised if Zen Cho would develop a full-blown novel out of this – and, honestly, I’m sure as hell gonna buy whatever she came up from this. This made me feel the same sort of way as when I finished reading The Black Tides of Heaven by JY Yang. Despite the length, the world was fully realized – the potential of an epic story too apparent. I hope it would morph into something more, expand more. I would also love for someone to make an in-depth analysis of this book – because I think, culturally and historically, there might’ve been many things I might’ve missed the first reading – and honestly, I am not qualified to do so. Until then, let me revel in the goodness of this story.

This is a stand-alone novella. So if you looking for a quick fix, this should do it. Asian-rep, with strong Malaysian references. Found-family dynamic, with the queer-normative writing and treatment of its characters. An interesting story with unique and compelling elements. I just wish it could have been longer. But nonetheless, definitely recommended.

Note on the cover: IT. IS. GORGEOUS. The kind of book cover you would buy to post in your wall or display in your bookshelf. I found out that this cover was created by Sija Hong. Seriously guys, check out her works in her site – they’re all so good (literally tried to search for “gorgeous” in the thesaurus because I am lost for words).

GET THE BOOK! >> Amazon | Book Depository | Barnes and Noble | Indiebound

3 thoughts on “Review: The Order of the Pure Moon Reflected in Water by Zen Cho” 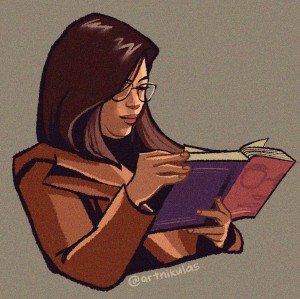 Hi, I am Riza – an auditor by profession and a ’round-the-clock geek from the Philippines. I’m a coffee-holic INTJ with an unhealthy obsession with books and stationery. I love to read and I review books from to time. Thanks for visiting my site!

Seemed Like a Good Idea at the Time: A Memoir
She's Full of Lit

powered by ramen and iced coffee

Mostly books, with a little wine writing on the side

Where books are bliss!

In the Lost & Found

I am made of memories

thoughts that make us think rather deeply.

The Elegant {Analogue}
travel with isabel